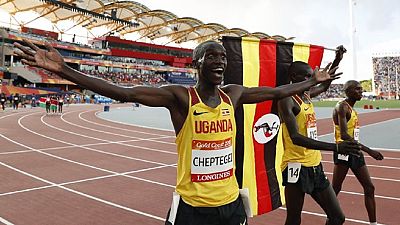 Ugandans are expressing their joy and heaping congratulatory messages upon long distance athlete, Joshua Kiprui Cheptegei, who on Sunday morning won the 5000m gold at the 2018 Commonwealth Games in Gold Coast, Australia.

The victory has particularly been sweeter for Ugandans who in 2017, watched as Cheptegei slipped from a commanding first place in the early laps to finish in 30th position, at the World Cross Country Championship held in Kampala, Uganda.

At the time, Cheptegei’s desperate last lap became an internet joke as Ugandans chose to laugh off their disappointment.

Since then, the 21 year old athlete has won won silver at the IAAF World Championships in London and run the world’s second fastest 15km race ever at the Seven Hills Race in Netherlands.

Congratulations to Joshua Cheptegei for winning gold in the Men's 5,000m finals at the ongoing Commonwealth Games in Australia. Uganda is proud of you.

Stuff of dreams!!?? Oh Uganda! What a moment! joshuacheptege1 won gold? today at gc2018 …?? ??
It was a remarkable moment to sing the national anthem!I was overwhelmed with 1000 emotions!? unbelievable joy mostly.??? #gc2018athletics pic.twitter.com/9ni0MbZmJd

Congratulations Joshua upon your amazing run. Your country salutes and celebrates you. #CountryBeforeSelf pic.twitter.com/nuqP1Ekmau

Video: #GC2018 commentator describes #Uganda ?? as a country of immense culture, music and energy, one of his favourite places! That is #MyCountry, the #PearlofAfrica. #Visit us, #Travel! #GC2018Athletics #GoldCoast pic.twitter.com/K3v8LV9tng

Joshua Cheptegei, who was mocked when he nearly collapsed during the IAAF championship in Kampala, has just won Gold at the ongoing Commonwealth Games in Gold Coast

Success and your many fathers.. please arrive!

Team Uganda has since increased its medal tally with Stella Chesang winning gold in the women’s 10,000m final and Mercyline Chelangat winning bronze in the same race.

Team Africa at the 2018 Commonwealth Games

While Ugandans are celebrating a gold medal, it is the South African delegation that has had the most success so far, in terms of medals won by an African country.

With 8 gold medals by Monday, South Africa’s total tally of 18 medals has them currently at fifth position on the Commonwealth Games medals table.