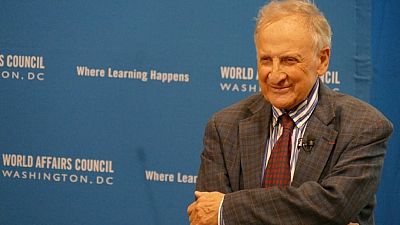 According to Cohen, Abiy Ahmed, 41, could afford to upset the powers that be because as he put it: “International community is with you.”

Cohen, who last month predicted that Abiy, who leads the Oromo bloc of the Ethiopian People’s Revolutionary Democratic Front (EPRDF) will be elected leader of the coalition also took a swipe at supposedly dominant bloc, the Tigrayan People’s Liberation Front (TPLF).

“Message for new Ethiopia Prime Minister Abiy Ahmed: Do not be reluctant to take bold steps toward democratic reform. TPLF politico-economic monopolists have been revealed as frauds, and will not be able to restrain you. International community is with you,” his tweet issued barely 24-hours after Abiy was elected read.

Abiy, a former Minister of State is an academic and former military officer who months back was elected leader of the Oromo Peoples Democratic Organization (OPDO), in a move that was aimed at having him well positioned to contest the vacancy left by the departure of Hailemariam Desalegn.

Having been elected EPRDF chairperson, he awaits approval by the party’s council and parliamentary ratification to resume official duties as Prime Minister – that is leader of government business.

Cohen despite having retired from active service continues to comment on political ongoings around the continent. Aside Ethiopia, he has spoken on Cameroon, the Democratic Republic of Congo, Kenya, Togo among others.

Below are a series of tweets he has specifically issued with respect to Ethiopia.

While in Addis Ababa, #Ethiopia, Secretary Tillerson should have talks with Ethiopian government about their internal political crisis, and should encourage the regime in power not to fear an opening to transparent democracy.

New blog post: on the outlook for #Ethiopia in the aftermath of Desalegn’s resignation, and the regime’s options moving forward. https://t.co/bw2ZUvu5vo