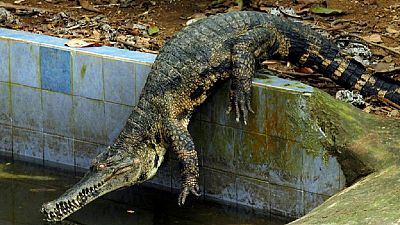 Authorities in Zimbabwe on Thursday shot and killed a huge crocodile that had blocked the entrance of a hospital located in the town of Hwange.

The reptile had stationed itself at the gate of the St. Patrick’s hospital preventing people from entering or leaving the facility for about two hours.

Tinashe Farawo, spokesman of Zimbabwe Parks and wildlife authority defended the shooting saying the reptile had been put down “because it had become a threat to life.”

Community members expressed surprise at incident given that the closest large water body was estimated to be some 10 kilometers from the hospital.

According to a local portal, Bulawayo24.com, a community leader, one Chief Shana averred that based on local belief, there was a suspicion the crocodile was pursuing someone it had failed to finish off earlier in the day.

The hospital authorities, however, said no patient had been admitted with crocodile-related injuries.

The Parks and Wildlife official explained to AFP news agency that the increase in rains meant there had been several recent reports of crocodile attacks in the country.

One woman was killed in the capital Harare as she crossed a stream, while another boy escaped in the south-east of the country.