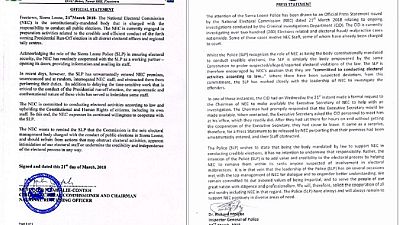 Sierra Leone’s police on Thursday dismissed accusations by the election commission that officers were disrupting its activities ahead of a March 27 presidential run-off, bringing the force’s impartiality into question.

Tensions are high ahead of the vote with a campaign marked by violent attacks and intimidation against politicians and supporters, along with an increase in inflammatory tribal rhetoric.

The National Electoral Commission (NEC) said in a statement late Wednesday the police had “unwarrantedly entered NEC premises, unannounced and at random, interrogated NEC staff; and obstructed them from performing their duties.”

Their actions “served to intimidate some staff”, it added.

The police responded on Thursday by pointing out it was investigating 200 election-related crimes nationwide, some involving NEC staff.

A spokesman said officers had to wait “hours on end” to question the executive secretary of the body on Wednesday, adding that the commission’s declaration therefore came as a “surprise”.

The force’s role was to “remove from within its ranks” any NEC staff member likely to undermine Sierra Leone’s electoral process, the spokesman added.

The commission’s statement is likely to inflame opposition accusations that the police are in the pocket of the ruling All Peoples’ Congress (APC), whose candidate came second in the first round of voting on March 7.

Ballot papers to be used in the 27 March Presidential run-off #election have arrived at Lungi Airport. Political party representatives, observers and the media were present. #votesalone pic.twitter.com/eRPBmLrDgc

The home of opposition leader Julius Maada Bio was surrounded after polls closed that day, leading to a stand-off, though he was not arrested and police dispersed hours later.

Bio, from the Sierra Leone People’s Party (SLPP), took 43.3 percent of votes, while Samura Kamara of the APC took 42.7 percent, propelling them into the run-off.

The APC and SLPP alike have complained that fraud marred the vote, which was declared fair and credible by international and domestic observers.

The Head of the United Nations Office for West Africa and the Sahel (UNOWAS), Mohamed Ibn Chambas, said Thursday the polling body was “working under exceptional challenges to discharge its constitutional responsibilities within tight time constraints”.

He further demanded all sides “exercise restraint and not interfere with or compromise the independence and integrity of NEC”.