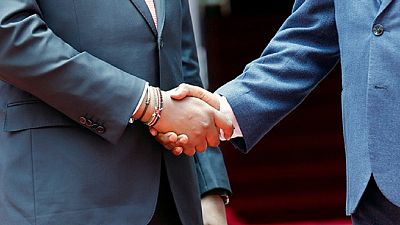 Kenyan opposition leader Raila Oding has revealed the process and details that led to a surprise reconciliation with the Kenyan president Uhuru Kenyatta.

The two politicians who have not been seeing eye to eye since the disputed August 8, 2017 presidential elections, held a meeting and addressed the press together last week on Friday.

They told Kenyans that they had decided to put aside their differences and work together to unite the nation.

We agreed with President Kenyatta that all these among other injustices must be addressed and compensation made to the affected families.

Odinga who had declared himself the ‘people’s president’ had not spoken to his supporters since the March 9 meeting.

Victims to be compensated, charges dropped

During a visit to his home turf of Kisumu this week on Friday, Odinga addressed an enthusiastic crowd of his supporters and outlined the details of his deal with the government.

Odinga said the victims of violence during the last General Election will be compensated by the government.

“Many of our people were killed and maimed following the elections last year. We agreed with President Kenyatta that all these among other injustices must be addressed and compensation made to the affected families,” Odinga said.

Anti-government protests erupted in some parts of the county following the 2017 General Election and the repeat presidential poll. Dozens of people were killed and others injured as police moved to quell the protests.

I wish to thank the people of Kisumu County for a very warm welcome and strongly endorsing the national reconciliation process that we are undertaking for the sake of our beloved nation. Asanteni sana pic.twitter.com/UC9TCbC8f6

Odinga also revealed that suspects facing charges in connection with his January 30 ‘oath’ as people’s president will be freed and charges dropped.

Odinga said he discussed with Mr Kenyatta a myriad of issues aimed at burying old enmities and fostering unity among the country’s communities.

The opposition leader made a triumphant entry into, for the first time after he declared he would work with his President Kenyatta to cheers from a huge crows.

While addressing the crowd in Kisumu’s Kondele, one of the epic centres of the 2017 post-election violence, Odinga clarified that the talks were between ‘two’ presidents and not between Nasa and Jubilee.

He told the crowd that with their permission, he would bring president Kenyatta to the Nyanza region to ‘affirm the peace act’.

Raila said all the 44 Kenyan tribes must walk together to the promised land he has been promising his supporters, adding that he and President Kenyatta will tour the country to preach peace and reconciliation.