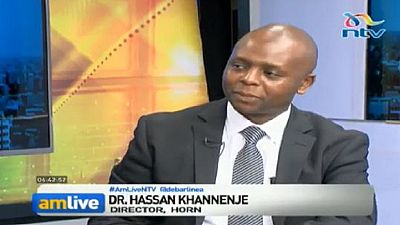 A Kenyan conflict analysis resolution expert says Kenya must employ diplomatic channels to help Ethiopia out of the current political crisis it finds itself in.

According to Hassan Khannenje, the current state of affairs was just a matter of time after decades of iron fist rule by the Ethiopia Peoples Revolutionary Democratic Front (EPRDF).

Ever since the days of Hailesellasie to Mengistu Hailemariam and then after he was overthrown (really), there has never been a debate in Ethiopia or political space, essentially it has been a police state.

“Ever since the days of Hailesellasie to Mengistu Hailemariam and then after he was overthrown (really), there has never been a debate in Ethiopia or political space, essentially it has been a police state,” he stressed.

He averred that in the absence of a substantive head of government, i.e. a Prime Minister, the country was confused, adding that the state of emergency did not help matters because it is often used to repress opposition groups.

“And this is a culmination of many years of autocracy and authoritarianism. Now, in the absence of the Prime Minister at the moment or at least the state control of power in certain places, a lot of time the opposition tends to suffer, it gets scapegoated, it gets repressed.

“… the Oromo being the largest ethnic group in Ethiopia and having been resistant to the status quo for many years, of course they are going kto get the first flak. Now, Kenya had seen this coming and we cannot pretend we were unaware of the goings on in Ethiopia.

Kenya until recently had not actively waded into the Ethiopian situation. The recent influx of thousands of refugees following a botched military operation in the border town of Moyale has forced the media to discuss Ethiopia.

“This was bound to happen sooner or later and what I am hoping is our Minister of Foreign Affairs or Interior have a moral bust approach both diplomatically with Ethiopia to make sure that thing does not overflow.

“But also to use its influence on the current rulers within at least on the Ethiopian circles, at least, to try and calm things down. Today Ethiopia needs help. They are still trying to figure out a direction where to go from here, they are confused,” he said.

Hassan Khannenje sees the current Ethiopian crisis as the beginning of the end of autocracy. #AMLiveNTV pic.twitter.com/xQ3Z0r6ygN