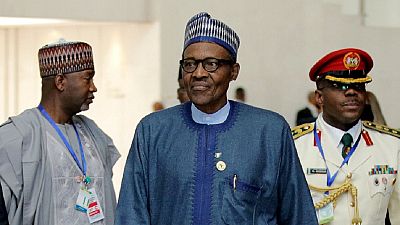 President of Nigeria, Muhammadu Buahri, has lauded efforts by Ghana in mediating the political crisis in Togo where opposition groups are calling for incumbent Faure Gnassingbe to resign.

An opposition coalition of 14-parties have held consistent protests since August 2017 demanding an end to what they describe as five decades of a family dynasty.

A known online activist close to the coalition has meanwhile announced that protests are due to restart next week after talks mediated by Ghana’s president hit a dead end last month.

The coalition of opposition parties have announced that protests will resume next week starting the 13th. This comes up after the regime’s refusal to fulfill the prerequisites for the dialogue and the recent surge of violence against civilians #Fauremustgo #Togodebout

Buhari was speaking during Ghana’s 61st Independence celebrations on Tuesday. He was a special guest for the event, as part of efforts to cement bilateral relations between the two West African giants.

“Permit me to put on record Ghana’s untiring effort in brokering peace in Togo by bringing all the warring factions to the negotiating table. I am appealing to all the opposition parties in Togo to please come together to resolve their differences so that Togo will move forward.

“It’s the same thing I wish Nigeria and Ghana to continue to provide the impetus in realising the objectives and ideals of the founding fathers of the Economic Community of West African States to ensure security, peace and development of our region,” he stressed.

Ghana’s president Nana Addo Dankwa Akufo-Addo on February 19 met with the government and opposition representatives in the capital Lome for a first round of talks.

After the engagement, the government made a number of concessions including releasing a number of political prisoners whiles processing others for trial. The second round of talks failed to hold because the parties had failed to agree on crucial terms arising from the first meeting. A new date for talks has yet to be fixed.