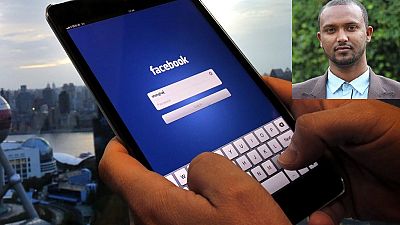 After the Supreme Court in Ethiopia reduced his jail rem in November last year, reports indicate that a top opposition official, Yonatan Tesfaye, has been released.

Journalists and activists confirmed that he had been released from the Zeway prison located in the Oromia State.

According to blogger Befeqadu Hailu, his release was delayed after he refused to sign a ‘pardon’ statement. He added that “they released him during strike day when no one was there and he is facing a challenge (of getting transport means) to come back home, Addis (Ababa).”

Tesfaye spokesperson for Semayawi (Blue Party) was arrested in 2015 over Facebook posts deemed as incitive by the state. He was subsequently charged and convicted of “associating with a terrorist organization” after criticizing the government on his Facebook account.

The apex court slashed his six years and six months sentence to three years in November 2017 after his lawyer argued that his client had to be tried under common law and not the Anti-Terrorism Proclamation (ATP).

His posts were said to have helped ignite the Oromo protests which hit the country from 2015 through to 2016 till a state of emergency was imposed in October that year.

Yonatan Tesfaye, arrested for expressing his views on Facebook released from Zeway prison. Yonatan has been through a lot while in prison. Take a look the bellow animation video about rights violations against him. ?#Ethiopia https://t.co/n4kTkHAC3O