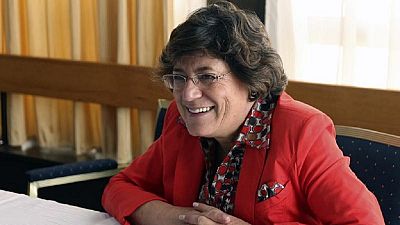 The European Union (E.U.) must start being tough with the Ethiopian regime especially given the current political climate, a Member of the European Parliament has said.

MEP Ana Gomes has thus requested that the parliament summons the E.U. Commission vice-president and top diplomat to explain the body’s most recent statement on the Ethiopian crisis.

According to her, the statement was weak and failed to send a strong signal to the regime especially relating to the reinstatement of a state of emergency (SoE) – the second measure in the last two years.

And the statement made by the European Union is a shame compared namely by the one that was put out by the Americans condemning the reinstatement of the state of emergency.

“I have asked this moment to ask you to raise with the High Representative Mogherini, the situation in Ethiopia. Brutal repression is going on, the Prime Minister has resigned (and) there has been a state of emergency reimposed.

“And the statement made by the European Union is a shame compared namely by the one that was put out by the Americans condemning the reinstatement of the state of emergency.

“I ask you to bring this up with the (European Union) Commission and the High Representative, so that the European Union, indeed, has a position that respects our values and meets the interest of democracy that has to be inclusive in Ethiopia and the establishment of the rule of law and the respect for human rights,” she said in a session on March 1.

My question at EP plenary today on shameful eu_eeas statement endorsing reinstatement of #StateOfEmergency in #Ethiopia (albeit with limits….). FedericaMog must review disastrous #EU standing by repression and descent to chaos in Ethiopia https://t.co/qYbiJf6JMq via youtube

Gomes is a Portuguese politician who doubles as a Socialist Member of the European parliament.
She is currently a member of the political committee of the socialist party, is known to be someone who frequently speaks on Ethiopia politics.

She was part of efforts calling on the government to disclose charges against Oromo leader Merera Gudina after his in 2016. She is on record to have slammed the government after his release stating that he did not have to be arrested in the first place.

The resignation by Prime Minister Hailemariam Dessalegn opens a period of uncertainty in Ethiopia. It will be important for the new government to have the full capacity to pursue the positive reforms initiated by the Prime Minister to address the grievances of the population.

Only a constructive dialogue among all stakeholders – authorities, opposition, media, civil society – will allow for a peaceful and durable resolution of the crisis.

The announced reinstatement of the State of Emergency risks undermining this very objective. It is therefore of the utmost importance that it should be as limited in time as possible and respectful of human rights and fundamental freedoms, notably those enshrined in the Ethiopian Constitution. Violence should also be avoided.

As a committed partner of Ethiopia and of the Ethiopian people, the EU will continue to encourage all actors to work constructively towards a democratic and stable Ethiopia.

We strongly disagree with the Ethiopian government’s decision to impose a state of emergency that includes restrictions on fundamental rights such as assembly and expression.

We recognize and share concerns expressed by the government about incidents of violence and loss of life, but firmly believe that the answer is greater freedom, not less.

The challenges facing Ethiopia, whether to democratic reform, economic growth, or lasting stability, are best addressed through inclusive discourse and political processes, rather than through the imposition of restrictions.

The declaration of a state of emergency undermines recent positive steps toward creating a more inclusive political space, including the release of thousands of prisoners. Restrictions on the ability of the Ethiopian people to express themselves peacefully sends a message that they are not being heard.

We strongly urge the government to rethink this approach and identify other means to protect lives and property while preserving, and indeed expanding, the space for meaningful dialogue and political participation that can pave the way to a lasting democracy.