A vigil has been held in Slovakia for a journalist whose death police believe is likely linked to his investigative work.

Jan Kuciak and his girlfriend were found dead on Sunday at his home in Velka Maca, 65 kilometres east of the capital, Bratislava.

The case has shocked the small, central European country .

“It is unbelievable. They were very nice people. They bought this house together and did it up,” said a neighbour of the deceased couple.

The country’s Attorney General Jaromir Ciznar said: “If it turns out that this act was committed in connection with the work of the murdered journalist and his girlfriend, I guarantee that I will raise hell here.”

Everything will be done to make this clear, because it is not possible to claim we are a legal and democratic state, and then allow this to happen,” he added.

Slovakia’s leaders have promised to bring the journalist’s killers to justice.

The government has meanwhile offered a one million euro reward for information leading to an arrest.

“I want to express my sincere condolences. If it is confirmed that this act was work-related, it is an unprecedented event and it is an attack on the freedom of the press,” said the country’s Prime Minister Robert Fico.

Kuciak’s last story looked at transactions by firms linked to businessman Marian Kocner. But Kocner has told Slovakia’s public broadcaster he has no connection to the case.

A link to Italy’s Calabrian mafia has also been suggested. 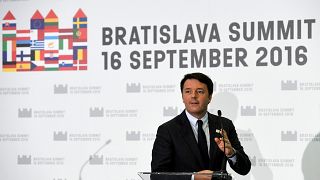