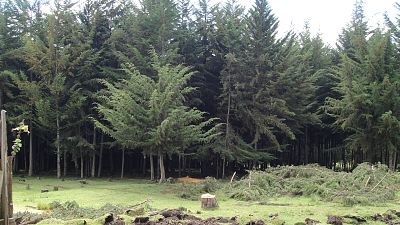 Kenya’s Deputy President William Ruto on Saturday suspended logging in all forests in the country for the next three months as water levels in major rivers continue to drop at alarming levels. This move is part of efforts by the country’s government to respond to the drought that is sweeping the country.

“The government has with immediate effect imposed a moratorium on timber harvesting in all public and community forests for a period of 90 days to allow reassessment and rationalisation of the entire forest sector in Kenya,” Ruto said.

The ban on logging comes three days after the country’s Members of the National Assembly Environment and Natural Resource Committee appealed to the Government to consider totally banning logging to save the water towers.

In addition to the ban on tree cutting for 90 days Mr. Ruto asked the environment ministry to form a task force working group to find solutions to the crisis.

The government has with immediate effect imposed a moratorium on timber harvesting in all public and community forests for a period of 90 days to allow reassessment and rationalisation of the entire forest sector in Kenya.

Before independence in 1963, forests covered 12% of Kenya but today they represent only 7.5% of it’s territory as illegal logging, charcoal production and human encroachment have continued to ruin the country’s watersheds.

Among them, the most important – the Mau Forest in the Rift Valley, whose rivers feed 7 lakes, including Lake Victoria and the Masai Mara game reserve. “It’s too late, this decision should have been made ten years ago,” said Richard Keter, chairman of the NGO Greenlife Ecosystem, replanting trees in the Mau forest.

As Earth Journalism reports, as early as 1990, people invaded the Mau forest to burn trees into charcoal, an activity that decimated the forest and drove away much of the bee population. By 2000, this damage had spread to more than 100,000 hectares of the forest.