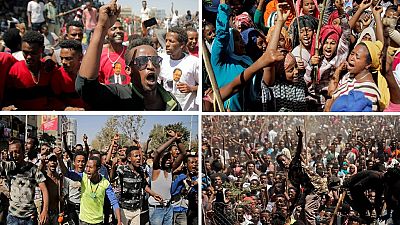 Ethiopia will most likely slide back into a state of unprecedented protests with the re-arrest of top Oromo opposition leaders, a freelance journalist, Mohammed Ademo has cautioned.

Ademo who is editor of the Opride portal was reacting to news late Saturday that federal forces had detained top opposition leaders belonging to the Oromo Federalist Congress (OFC). Among the detained leaders are Merera Gudina and Bekele Gerba.

“The re-arrest of Oromo opposition leaders would almost surely guarantee an unprecedented wave of protests and a bloody crackdown. A similar episode during the last state of emergency led to the detention of more than 20,000 people in a matter of few days,” he said in a tweet.

He described the standoff that led to their detention in western Ethiopia as worrying and a sign of renewed crackdown in Ethiopia.

He further reported that federal forces had shot and killed about six civilians in the town of Dambi Dolo in Western Oromia.

For his part, top U.S.-based Oromo activist, Jawar Mohammed said it was in the interest of government to release the detained leaders or risk a nationwide action.

Ethiopia is currently under a state of emergency administered by a Command Post. The government said it imposed the measure to curb rising insecurity. Diplomatic missions have cautioned against abusing powers of security officials in enforcing the measure.

Secretariat of the Command Post and Minister of Defense, Siraj Fegessa, announced details of prohibited actions and measures to be taken against anyone if found violating the directives.

Nevertheless, the state is determined to implement the state of emergency, which is yet to be endorsed by the national parliament that is currently in recess.

Other than banning protests and publications inciting violence, the state of emergency seeks to outlaw the following: