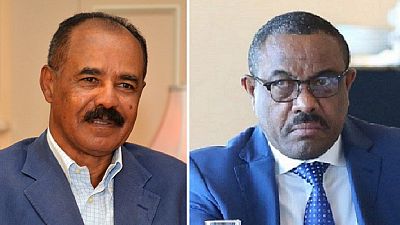 Eritrea continues to prolong the statutory duration of its national service because of the illegal occupation of its territory by neighbouring Ethiopia, its Minister of Information has said.

Yemane Ghebre Meskel added that those that condoned Ethiopia’s continue disregard for international law “have no business whatsoever to question or comment on Eritrea’s defense architecture.”

In tweets sent out on February 7, 2018; the minister also responded to recent reports about how predominantly Eritrean and Sudanese were being threatened with jail and deportation by the Israeli government’s clampdown on illegal migrants.

“Recent media, “pundits” discourse on Eritrean “asylum seekers”, (UNHCR, Al Jazeera Inside Story), are replete with the usual,worn-out, distortions and half-truths,” he said in a tweet.

It is largely reported that the forced national service allied with a struggling economy were responsible for the decision by most young people leaving the country to make the perilous journey towards Europe.

In 2016, Reuters reported that the Asmara government said its conscription was vital for national security stressing that it fears attack by its Ethiopia – from who they gained independence in 1993 but fought a bloody and expensive war that ended in June 2000.

On paper, citizens between the ages of 18 and 40 must complete 18 months of service to the state but diplomats and those who have fled say this can stretch to a decade or more. The government reserves the right to extend length of service in periods of emergency.

Each month as many as 5,000 people flee Eritrea according to U.N. figures, estimates the Eritrean government disputes. The government puts the population at about 3.6 million, while other estimates suggest it could be almost double that.

“The government is doing the utmost that it can do, under the circumstances,” Ghebremeskel told Reuters in 2016, saying salaries would rise but there were no plans to scrap or cut national service.

“Demobilization is predicated on removal of the main threat. You are talking about prolongation of national service in response to … continued belligerence by Ethiopia,” he added.

Asmara has continually called on the United Nations to ask Ethiopia to end their illegal occupation of Eritren territory, the most recent was in September 2017 during the UN General Assembly when Foreign Minister reiterated the call.