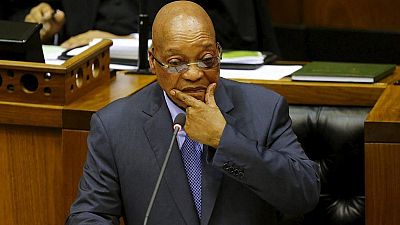 South Africa’s Jacob Zuma faces a no-confidence vote this month, a fresh attempt to unseat the president by opponents emboldened by splits within his own party.

Zuma, who is battling a string of corruption allegations, is in a weakened position since he was replaced as leader of the ruling African National Congress (ANC) party in December by Cyril Ramaphosa, the country’s deputy president.

The 75-year-old president is expected to meet the ANC’s six most powerful officials this weekend, but the agenda of the meeting has not been disclosed. Ramaphosa, 65, has been lobbying the ANC’s national executive to force Zuma to resign.

The majority of parliament is going to say that Jacob Zuma will not be the president of South Africa because the biggest sentiment, even in the ANC, is saying that Jacob Zuma cannot continue as president.

Zuma, who has not said whether he will step down voluntarily before his second term as president ends next year, has been deserted by several prominent allies in the ANC since Ramaphosa took over leadership of what is the only party to govern South Africa since the end of apartheid.

On Friday, parliament speaker Baleka Mbete agreed to a request from the opposition Economic Freedom Fighters (EFF) for a motion of no-confidence, though she refused to hold the vote before the president’s state of the nation address on Feb. 8, and scheduled it for Feb. 22.

The rand, which tends to strengthen on signs Zuma could leave office, pared losses on the announcement from parliament.

Investors associate Zuma’s tenure with a period of economic decline, with growth slowing to an average of 1.5 percent a year and unemployment up to 28 percent from around 23 percent when he took office in 2009.

Zuma narrowly survived a no-confidence vote in August, but was politically wounded by some ANC lawmakers voting with the opposition.

In its letter requesting the vote, the EFF said Zuma was not a suitable head of state as he is likely to be embroiled in a judicial inquiry into state corruption. Zuma has denied any wrongdoing.

“The majority of parliament is going to say that Jacob Zuma will not be the president of South Africa because the biggest sentiment, even in the ANC, is saying that Jacob Zuma cannot continue as president,” EFF Deputy President Floyd Shivambu told eNCA television.

Another opposition party, the Democratic Alliance, had lobbied speaker Mbete to postpone the state of the nation address until Zuma had been removed from office.