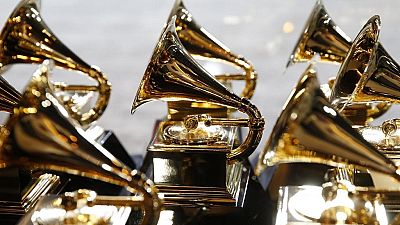 South African jazz legend Hugh Masekela was honoured at the Grammy Awards that were held in New York last night.

Africa was well represented at the biggest night in global music, from Rihanna’s ‘gwara gwara’ dance that has the become the subject of an ownership debate on Twitter to an actual Grammy win by South African band Ladysmith Black Mambazo.

Rihanna did the South African dance, the GwaraGwara.

But it is Rihanna’s performance of her hit song Wild Thoughts featuring DJ Khaled that got Africa talking.

South Africans praised her for doing the popular ‘gwara gwara’ dance, a dance move that was reportedly made popular by South African DJ Bongz.

The celebrations became more heated when a US magazine tweeted and called the same dance move, ‘the stanky leg’.

Do the stanky leg. pic.twitter.com/nDPJFmY1zb

South Africans then started tweeting to defend their ownership claims.

NAH. rihanna is doing a South African dance called #GwaraGwara. Give credit where it's due. Learn how to do it here: https://t.co/8VHp66addx https://t.co/0ougv9F9Cy

South African twitter is occupying plenty space in Vulture’s mansions because they called the dance Rihanna was doing ‘the stanky leg’ ??? pic.twitter.com/kN2RF7Tuhb

The debate is still on, and many have called on Rihanna herself to settle it by letting the world know which dance move inspired her New York Grammy performance.