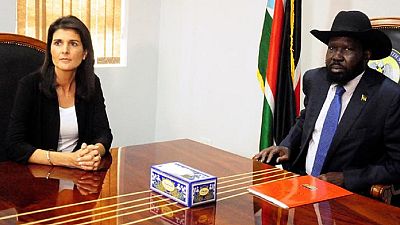 The president’s spokesperson Ateny Wek Ateny said the comment by Nikki Haley to the United Nations was demeaning, outrageous and an insult to the South Sudanese sovereignty.

Haley on Wednesday told the UN Security Council that her country was giving up on President Kiir for failing to end the violence in the war-torn nation.

She also said President Kiir had become an unfit partner to the US for prolonging the war and the suffering of the people of South Sudan.

“The time has come to acknowledge the hard reality – that the leaders of South Sudan are not just failing their people, they are betraying them,” Haley told a council meeting on South Sudan.

The tough talking diplomat asked that an international arms embargo be imposed on South Sudan.

But Ateny said it was not the responsibility of the US envoy to talk about the fitness of the South Sudan leader, as that was the preserve of the citizens.

“President Kiir is fit to govern South Sudan and the people of South Sudan know that,” Ateny told Africa Review on phone.

US media reported, that Haley slammed President Kiir for failures to respect last December ceasefire deal as well as his promotion of three army generals who were sanctioned by the UN for leading the slaughter of civilians in the four-year civil war.

“Attempts to ease the suffering of South Sudan’s people are failing, not just despite the leadership of South Sudan, but because of it,” Haley was quoted saying.

She called on African leaders gathered for a summit in Ethiopia at the weekend to “consider seriously the accountability measure it pledged for those who refuse to pursue peace.”

With another round of peace talks planned for next month, regional envoy and former Botswana president Festus Mogae also called for “consequences” for those who refuse to turn away from the battlefield.

“We cannot stand by as South Sudanese leaders sign an agreement one day and authorise or allow its violation with impunity the next,” Mogae told the council by video-conference from Juba.

South Sudan descended into war in December 2013 when Kiir accused his former deputy Riek Machar of plotting a coup.