Tanzania Chief Justice warns politicians to stay off the judiciary 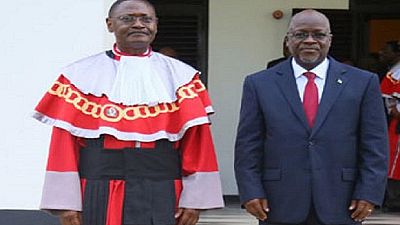 Head of Tanzania’s judiciary, Chief Justice Ibrahim Hamis Juma, has cautioned politicians to stay off his ‘territory’ warning of grave consequences for those who do not.

He reiterated that with the sole mandate of dispensing justice vested in the judiciary, it was not acceptable for anyone else to attempt tampering with that constitutional mandate.

“Anybody who does so will be dealt with accordingly … this is the message I want to send,” he is quoted by The Citizen news portal.

I appeal to all government leaders to refrain from meddling with the issues that are within the rights, status and constitutional authority of the judiciary.

“We are going to be stricter at this at the magistrates’ and judges’ level in dealing with anyone who crosses over to interfere with our decisions and independence.

“I appeal to all government leaders to refrain from meddling with the issues that are within the rights, status and constitutional authority of the judiciary,” the 60-year-old who was appointed in September 2017 stressed.

He was speaking at a press briefing in connection with the country’s Law Week celebrations which marks the beginning of the court calendar.

Lawyers in the democratically stable East African country have welcomed the CJ’s warning but they insist that he should be talking to the government directly because it was the main culprit when it came to flouting court orders.

He has served as a high court judge under president Jakaya Kikwete in 2008. He was later promoted to the court of appeal in 2012.