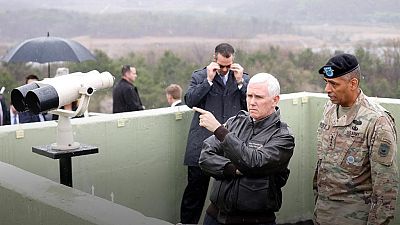 Vice President Mike Pence has arrived in Cairo on Saturday on his first visit in a four-day tour to the Middle East. Pence plans to visit Amman and Jerusalem as well This is the first U.S. high-profile official visit to the region after the American recognition of Jerusalem as Israel’s capital in December.

Pence, a strong supporter of Trump’s decision on Jerusalem, will also visit the city’s Western Wall and give a speech at the Israeli Knesset, the statement said.

The U.S. vice president left Washington on Friday and will meet with Sisi on Saturday, then he will fly to Amman to hold talks with King Abdullah II on Sunday, before he heads to Jerusalem where he will spend two days.

“How can I sit with those who granted what they do not own to those who do not deserve it,” Tayeb expressed in the statement, alluding to U.S. President Donald Trump’s recognition of Jerusalem as the capital of Israel. The Grand Imam called on Trump to overturn his illegitimate and illegal decision.

Coptic Pope Tawadros II of Alexandria and Patriarch of Saint Mark’s Diocese also declined Pence’s meeting invitation. “This decision affects millions of people’s feelings in the region. How could we meet him after this?” the Pope wondered during an interview with CBC television channel on January 8.

On December 21, a total of 128 countries defied President Donald Trump’s threat and voted in favor of a United Nations General Assembly resolution calling for the United States to drop its recognition of Jerusalem as Israel’s capital