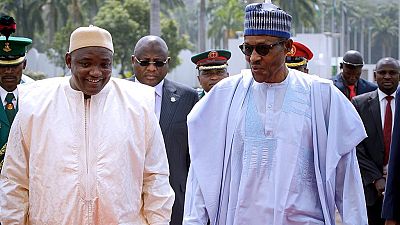 Buhari stressed that in the interest of multi-party democracy, it was important to ensure that Jammeh did not have his way – the leader of 22 years had sought to reverse an electoral defeat to the then coalition candidate, Adama Barrow.

“We thank God for the role He allowed us to play in the Gambia. We believe in multi-party democracy. In Africa, it is absolutely necessary… Patience on the part of leaders is also necessary in view of ethnic and religious diversities that prevail,” Buhari said when Barrow paid him a visit on Tuesday.

Barrow who took power in January 2017 after the end of Jammeh’s tenure said his visit was primarily to thank Buhari for the role he played during the political transition. Buhari led a team of ECOWAS mediators which met Jammeh twice in Banjul.

Beside Buhari, the then EOWAS chair Ellen Johnson Sirleaf, Sierra Leone’s Ernest Bai Koroma and Ghana’s John Dramani Mahama were part of the team. They failed to get Jammeh out and resorted to applying the military option as troops were put on stand-by to oust Jammeh.

In the end, Jammeh was talked out of his position by his Guinean and Mauritanian peers – Alpha Conde and Mohammed Ould Abdul Aziz managed to get Jammeh to accept a life in exile. He is currently living in Equatorial Guinea.