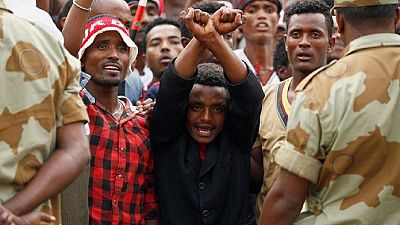 Ethiopian authorities have dropped charges against a senior opposition leader and hundreds of others who had been jailed for involvement in unrest that gripped the country in 2015 and 2016, the country’s attorney general said on Monday.

Hundreds have been killed in violence in the Horn of Africa country since protests first erupted in its central Oromiya province over allegations of land grabs.

Several dissident politicians have since been jailed having been charged with involvement in terrorism and collusion with the secessionist Oromo Liberation Front, which the government has branded a terrorist group.

Facing mounting unrest, Prime Minister Hailemariam Desalegn announced earlier this month that jailed politicians would be released and those facing trial would have their cases dismissed in a bid to foster reconciliation.

On Monday, Attorney General Getachew Ambaye told journalists that 528 people had so far been selected for clemency, including Merera Gudina – leader of the opposition group Oromo Federalist Congress who was arrested in late 2015.

Getachew said criteria for their selection involved taking into account proof that the suspects did not take part in actions that led to killings and severe injury, damaging infrastructure, and “conspiracy to dismantle the constitutional order by force”.

“All 528 will be released within two months,” he said.

Merera was arrested after a trip to Brussels to meet members of the European Parliament, and formally charged with attempting to “dismantle or disrupt social, economic and political activity”.

He was also accused of backing a secessionist group Addis Ababa labels a terrorist movement, as well as flouting guidelines on a state of emergency that was imposed for nine months during his trip to Belgium.

Nearly 700 people died in one bout of unrest during months of protests in 2015 and 2016, according to a parliament-mandated investigation.

Rallies over land rights broadened into demonstrations over political restrictions and perceived rights abuses, before spreading into the northern Amhara region and – to a smaller extent – in its SNNP province in the south.

In recent months, a spate of ethnic clashes have also taken place. Dozens of people were killed in several bouts of violence between ethnic Oromos and Somalis in the Oromiya region last year.

Hailemariam made his announcement after the ruling EPRDF coalition concluded a weeks-long meeting meant to thrash out policies to address grievances.

The unrest had triggered growing friction within the party. Some high-ranking members had subsequently submitted their resignation, while officials have openly squabbled with each other over the cause of clashes.

Getachew said more pardons and releases are set to follow.

Ethiopia, sandwiched between volatile Somalia and Sudan, is often accused by rights groups of using security concerns as an excuse to stifle dissent and media freedoms. It denies the charge.