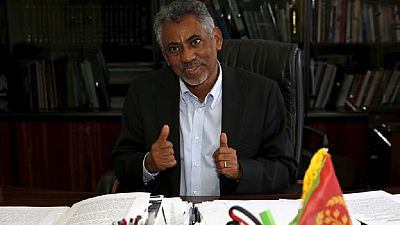 Eritrea has responded to the United States’ recent re-designation of the country to a list of 10 “countries of particular concern” under the International Religious Freedom Act.

The U.S. accused the 10 countries of having engaged in or tolerated egregious violations of religious freedom. Yemane Meskel, Eritrea’s Information minister, however, said in a tweet that the U.S. was simply dwelling on ‘false narrative’ to arrive at its recent position.

He stressed that Eritrea remained a country of ancient religions and one whose people are pious and live with religious tolerance of one another.

Eritrea: a country of ancient religions; exemplary / unique culture of religious tolerance / co-existence and a very pious people. Yet, US State Department dwells on false narrative concocted in the first place for political reasons.

“Eritrea: a country of ancient religions; exemplary / unique culture of religious tolerance / co-existence and a very pious people. Yet, US State Department dwells on false narrative concocted in the first place for political reasons,” his tweet read.

The U.S. State Department on December 22 re-designated Eritrea, neighbouring Sudan and eight others over violations of religious freedoms. Beside the Africa duo, China is listed as well as Iran, Myanmar and North Korea.

Completing the list is Tajikistan, Turkmenistan, Uzbekistan and one of America’s biggest trade, diplomatic and security allies, Saudi Arabia. Pakistan was also placed on a special watch list, the State Department added.

Eritrea, despite being a largely religious nation, there are multiple reports of the government having arrested and detained religious leaders, some without trial.

Issues came to a head in November last year when security forces were deployed to break up a rare protest in the capital, Asmara. Students of an Islamic school were protesting government interference in the running of their institution and calling for the release of a detained principal.

Sudan has also been severally accused of repressing religious freedoms especially of non-Muslims. Some of the undertones that led to South Sudan’s independence were hinged on religious freedoms. The country has a dominantly Muslim north with the south being Christian.