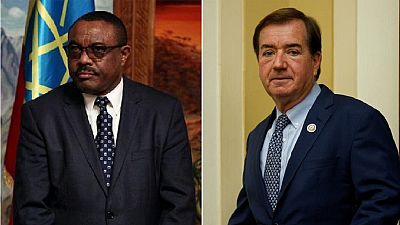 Chairman of the Foreign Affairs Committee of the U.S. House of Representatives has reacted to Ethiopia’s latest political reform announcement under which political prisoners are to be released and its Maekelawi detention facility closed down.

In a terse statement released by his office, Ed Royce, said it was important that the government had finally acknowledged holding political prisonsers. He said more importantly, the government should honour commitments made in the January 3, 2018 announcement.

“Ethiopia has finally acknowledged that it holds political prisoners. Now, the government should follow through on its commitments to release them and close a prison camp notorious for torture.

If Ethiopia is to remain a strong U.S. partner and a source of stability in a dangerous region, the government must respect the rights of the Ethiopian people.

“If Ethiopia is to remain a strong U.S. partner and a source of stability in a dangerous region, the government must respect the rights of the Ethiopian people,” the statement concluded.

His statement recalled efforts made by the Congress in pushing Addis Ababa to respect political rights especially via a resolution of July 2017 in which they condemned excessive and deadly use of force by security agents on protesters and the detention of dissidents.

Earlier this week, Prime Minister Hailemariam Desalegn addressed a joint press briefing with other chairpersons of the four-member ruling coalition.

He said the Mae’kelawi prison would be converted into a museum whiles government establishes in its place, a new center based on the national parliament’s guidelines on human rights and international standards.