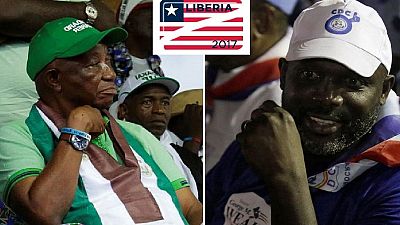 Liberia’s Supreme Court has ruled that evidence of fraud in the country’s October election was insufficient for a re-run, paving the way for a second round run-off between ex-soccer star George Weah and Vice-President Joseph Boakai.

“In the absence of sufficient evidence, the court cannot order a re-run of the election,” Justice Philip Banks said, reading out the court’s decision.

Weah topped the October poll with 38.4 percent of votes and Boakai had 28.8 percent in second place. The law requires that a presidents gets half of the votes cast to win

In a 4 – 1 decision by the Supreme Court, dissenting judge, Justice Kabineh M. Ja’neh said it was deeply disconcerting that his colleagues had decided to ignore the glaring discrepancies and evidence of gross irregularities in electoral process leading up to and during the October polls.

The date of the run – off will be determined and announced by the electoral commission which has been ordered by the Supreme Court to conduct critical reforms before the next election.

Some of the Supreme Court orders to the Electoral Commission include prohibition of the Chairman and NEC staff from speaking on any matter that may affect a party to the run- off and also fully comply with the electoral management laws of Liberia.