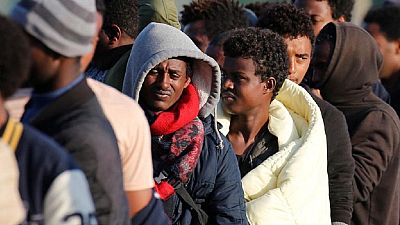 The government of Ethiopia says it is in the process of making arrangements to repatriate its citizens in Libya, the state-owned ENA portal has reported.

Meles Alem, spokesperson of the Foreign Ministry says through the Ethiopian embassy in Cairo, Egypt; the authorities have located nationals stranded in the north African country.

Repatriation of black Africans from the country has been on the international news agenda after an investigative piece by United States-based channel CNN showed a slavery market where migrants were being sold for $400.

Ethiopia despite its economic successes has been identified as a key source of migrant population trying to reach Europe via the Mediterranean. Along with neighbours Eritrea and Somalia, they continue to dominate figures released by UN bodies and other aid agencies.

The news received global condemnation with the Libyan government tasked to bring perpetrators to book. In the wake of the news, several African countries have located and flown their citizens back home. Nigeria, Ghana, Ivory Coast and others have all taken such steps.

The African Union has so far stated that it will help repartiate a total of 20,000 stranded migrants. The African Union – European Union summit held in Abidjan in early December 2017 had migration at the top of the agenda despite its theme being on youth empowerment.