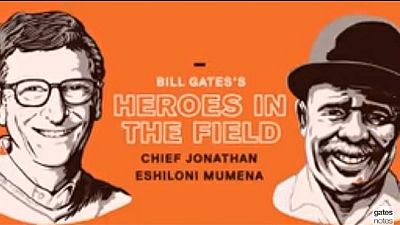 CEO of Microsoft and the world’s richest man Bill Gates has lauded two anti-AIDS activists for their efforts in combating the deadly disease. Gates described the two as heroes who are making a difference in the fight against AIDS.

The first was a Zambian tribal leader, Chief Jonathan Eshiloni Mumena XI. He leads the Koande people who live along Zambia’s border with the Democratic Republic of Congo (DRC).

The two met as far back in 2012 with Gates stating that Mumena “took a risk to challenge his tribe’s traditions in order to protect his people from AIDS.”

I think my biggest problem concerning this circumcision was that it is not a part and parcel of my culture. It was taboo to even talk about circumcision in my family.

In telling his own story, the chief said it took his son (Prince Benjamin) to effect a wholesale communal change in the area of male circumcision – which was seen as a taboo topic in the community. He described the scourge of HIV and AIDS as a ‘heavy cloud’ on the lives of his people.

He said Benjamin convinced him that voluntary male circumcision was a key intervention capable of saving the lives of men, that it could reduce a man’s risk of getting the disease by 60%. He said he got circumcised at the age of 47.

“I think my biggest problem concerning this circumcision was that it is not a part and parcel of my culture. It was taboo to even talk about circumcision in my family,” he said about circumcision. But he managed to convince his elders that there was the need for a change.

He spoke passionately about how the entire community embraced the new order with women challenging their husbands to go for it whiles they also ensured that their sons were circumcised.

Gates wrote about the other hero, Guided by her belief that health care is a basic human right, Dr. Krisana Kraisintu, a pharmacist from Thailand, has worked tirelessly to make medicines affordable to even the poorest in the world.

Her development of generic versions of the lifesaving HIV drugs dramatically reduced treatment costs, saving and improving countless lives. She has also dedicated her pharmaceutical skills to reduce treatment costs for malaria and other diseases.

Of course, Chief Mumena and Dr. Kraisintu are just two of the countless individuals—doctors, policymakers, researchers, activists, and political leaders—whose contributions have helped turn the tide against the disease.

Much of this progress has been made possible by the world’s enormous investments in efforts to defeat the epidemic, including the Global Fund to Fight AIDS, Tuberculosis and Malaria, and the U.S. HIV/AIDS program known as PEPFAR, President’s Emergency Plan for AIDS Relief. Still, many challenges lie ahead in the fight against the AIDS epidemic.