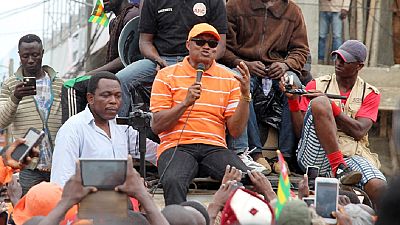 Hundreds of Togolese opposition members turned up for the new round of anti-government protests in the capital Lome on Monday. Wednesday’s march was largely peaceful according to reports from local media.

The protest is expected to continue today Thursday (November 30) with the last in the series, planned for Saturday December 2 according to an itinerary published by the opposition coalition.

The coalition is going ahead with the planned protests despite embattled president Faure Gnassingbe promising to hold dialogue with them last week.

Mobilisation will continue, even during talks. We are not going to give up the fight.

Jean – Pierre Fabre, leader if the opposition National Alliance for Change led Wednesday’s protests and stressed that they will continue the mass action even if talks begin. “Mobilisation will continue, even during talks. We are not going to give up the fight,” he told AFP news agency.

A coalition of 14 opposition parties has organised a series of weekly protests since late August, calling for and end to the Gnassingbe family dynasty which has ruled Togo for the last 50 years. They are also demanding the introduction of a two-term limit for presidents and electoral reforms.

They want the presidential terms limits to be applied retroactively to prevent Faure from standing in the next two elections in 2020 and 2025, and potentially staying in power until 2030. Indications show that the government proposal wants the law to start in the next elections due in 2020.

Talks are under way through the intervention of mediators such as Ghana’s President Nana Akufo-Addo and Guinea’s Alpha Conde, to organize a political dialogue between the government and opposition that could take place “in a few weeks,” according to president Gnassingbé.