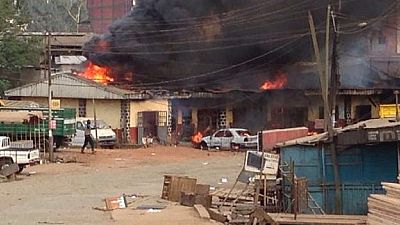 The United Nations Regional Office for Central Africa (UNOCA) has expressed concerns over the rising spate of deadly exchanges between the Cameroon’s security forces and separatists in the country’s restive anglophone region.

UNOCA head and special emissary of the U.N. chief said the upsurge of violence against civilians and security forces was unacceptable stressing the need for dialogue to resolve deep seated differences.

“We strongly condemn those acts of violence. Their authors should be identified and brought before a court in accordance with the law,” Francois Lounceny Fall said in a statement on Thursday November 16, 2017.

He also spoke about commitment of the U.N. to the territorial integrity and unity of Cameroon as a nation. He further reiterated calls for calm and restraint and the need for inclusive dialogue to be held, a view advanced by President Paul Biya in October.

The two regions – Southwest and Northwest – have been at the heart of what has become known as the ‘anglophone crisis.’ The security forces have been accused by rights groups of heavy clampdown on people protesting marginalization in the regions.

Separatists have confirmed being behind recent attacks that has so far led to the death of four paramilitary forces – known as gendarmes. Their respective capitals (Southeast – Buea and northeast – Bamenda) have been under curfew following the attacks.