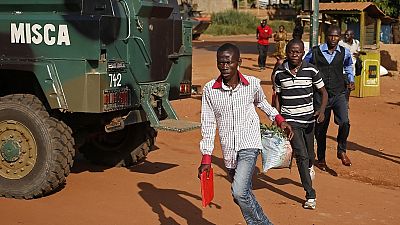 Seven people were killed and around 20 others were injured in a grenade attack on a peace concert and reprisal violence in Central African Republic’s capital, Bangui, on Saturday and Sunday, government officials and city residents said.

The riverside city has in the past been a flashpoint for inter-religious violence that erupted between Muslims and Christians in 2013 and has since engulfed most of the impoverished, landlocked nation.

“Following this heinous act, we have registered four deaths and 20 wounded, including four who are in serious condition and have been taken into the operating room,” he said.

Heavy gunfire concentrated in and around Bangui’s PK5 neighbourhood — a Muslim enclave in the majority Christian city — erupted after the attack.

Access to PK5 was blocked off by improvised barricades on Sunday, a Reuters witness said.

“Three of our youth were killed, apparently in reprisal because they think that the Muslims were behind the grenade attack. We deplore that attack,” said PK5 resident Habib Soule. “We set up barricades to ensure provocateurs don’t infiltrate our neighbourhood.”

A second PK5 resident and a security source, who asked not to be named, confirmed that three motorcycle taxi drivers were killed in retaliation for the concert attack.

“Even now there is sporadic gunfire in PK5 and the surrounding neighbourhoods are emptying,” said Gedeon Leki, a resident of the nearby Castors neighbourhood. “People are afraid the Muslims could take revenge for their dead.”

Nearly five years into the conflict in CAR, which has been marked by successive waves of ethnic cleansing, the security situation is worsening, particularly in the east.

Bangui, where the headquarters of 12,000-troop-strong United Nations peacekeeping mission is located, has been relatively stable in recent months, and the weekend’s violence was a reminder of the city’s darkest days.

“The enemies of peace … have just set a trap,” Prime Minister Simplice Mathieu Sarandji said in a radio address on Sunday. “I call upon the population not to slide back into violence.”

The U.N. Security Council is this week scheduled to vote on a French-drafted resolution to authorise an extra 900 troops to protect civilians in Central African Republic.