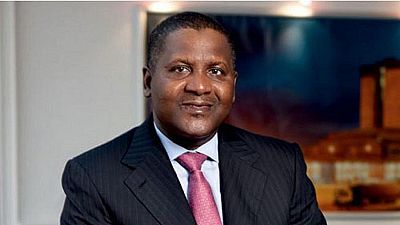 Africa richest man Aliko Dangote’s Foundation has pledged to invest US$100 Million over five years to tackle malnutrition in the worst-affected parts of Nigeria.

Dangote made the pledge at the just concluded Global Nutrition Summit 2017 held in Milan, Italy.

Nigeria’s high malnutrition rate is undermining progress towards improving child health and survival and putting the brakes on economic development.

The event convened governments, international agencies, foundations, civil society organisations and businesses to accelerate the global response to malnutrition, an underlying cause of nearly half of all global child deaths.

The Global Nutrition Summit is the global forum of the United Nations Decade of Action on Nutrition.

This year’s edition was held in close partnership with a number of International stakeholders including the Uk ‘s Department for International Development (DFID), the World Health Organization, the Food and Agriculture Organization of the United Nations, the Bill & Melinda Gates Foundation and the International Coalition on Advocacy for Nutrition.

Including world leaders Kofi Annan, former Secretary General of the United Nations and Chair of the Kofi Annan Foundation and Graca Machel, Founder of the Graca Machel Trust; high-level representatives of the governments of Tanzania, Niger, Ethiopia, Ivory Coast, Burkina Faso and Zambia and business leaders such as Aliko Dangote, Founder of the Aliko Dangote Foundation and Chairman of the Dangote Group, Africa’s largest home-grown conglomerate.

The Global Summit highlighted the cost of malnutrition to both societies and individuals. The Global Nutrition Report 2017 launched at the Summit, showed that despite progress, 155 million children globally are stunted and the world is off track on meeting internationally agreed nutrition targets.

The Aliko Dangote Foundation is the philanthropic organization of Aliko Dangote, founder and Executive Chairman of the Dangote Group.