US warns diplomatic staff of 'specific threat' at Mogadishu airport 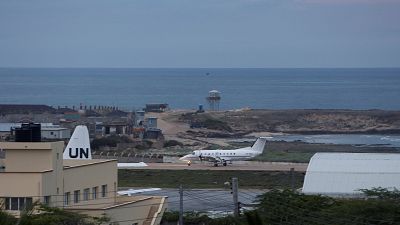 The US mission to Somalia on Saturday urged all of its non-essential staff to leave Mogadishu immediately following a specific threat against them at the capital’s international airport.

The warning came just hours after US forces confirmed carrying out their first-ever drone strikes targeting Islamic State (IS) jihadists in the Horn of Africa nation.

“Due to specific threat information against US personnel on the Mogadishu International Airport, the US Mission to Somalia has directed its non-essential US citizen employees to depart Mogadishu until further notice,” a statement posted on its website said.

It reiterated warnings that the situation in Somalia was “extremely unstable”, saying the threat level against US citizens remained “critical”.

In a statement released in Washington late on Friday, the US military’s Africa Command (AFRICOM) confirmed the strikes, saying they hit northeastern Somalia and killed “several terrorists”.

The first strike occurred around midnight on Thursday (2100 GMT) with the second taking place on Friday morning, some 11 hours later. There were no civilians in the area at the time, a spokesman told AFP.

Quoting an official in the port town of Qandala in the semi-autonomous region of Puntland, a report by Voice of America said six missiles hit an IS base in Buqa village, 60 kilometres (35 miles) away.

In recent months, US forces have repeatedly hit jihadists from the Shabaab rebel group that is aligned with Al-Qaeda, but the drone strikes were the first such strikes targeting IS, the spokesman said.

Several dozen armed men belonging to an IS-linked group briefly seized control of Qandala in October 2016, holding it for around six weeks before Somali forces retook it.

In May this year, the group claimed its first suicide attack in Somalia, killing at least five people in Bosaso, a coastal city some 70 kilometres (45 miles) west of Qandala, as it stepped up activities in a region dominated by the Shabaab.