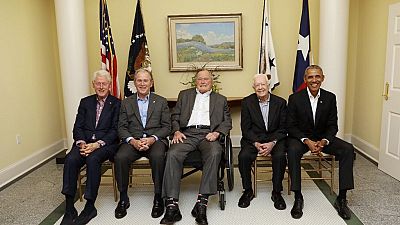 <p>Ex-Presidents of the United States on Saturday joined forces together for a concert aimed at raising funds to support survivors of the hurricanes that hit the US this year.</p> <p>Three Democrats,Barack Obama, Bill Clinton and Jimmy Carter, two Republicans, George H.W. Bush and George W. Bush were at the Texas concert that has so far raised $31m .</p> <p>The five living presidents formed the organization “One America” after storms destroyed states such as Texas, Florida,Puerto Rico and other parts of the US Gulf Coast and the Caribbean.</p> <blockquote class="twitter-tweet" data-lang="en"><p lang="en" dir="ltr">So grateful of <a href="https://twitter.com/ladygaga?ref_src=twsrc%5Etfw"><code>ladygaga</a> and all the entertainers for their amazing work<br><br>Live now <a href="https://twitter.com/ladygaga?ref_src=twsrc%5Etfw"></code>ladygaga</a> <a href="https://twitter.com/hashtag/DeepFromTheHeart?src=hash&ref_src=twsrc%5Etfw">#DeepFromTheHeart</a> <a href="https://t.co/UjioUiSR2A">https://t.co/UjioUiSR2A</a></p>— One America Appeal (@AmericaAppeal) <a href="https://twitter.com/AmericaAppeal/status/921911518274441216?ref_src=twsrc%5Etfw">October 22, 2017</a></blockquote> <script async src="//platform.twitter.com/widgets.js" charset="utf-8"></script> <p>Obama said “ All of us are on this stage here tonight could not be prouder of the response of Americans when they see their neighbors, when they see their friends,they see strangers in need,Americans step up’‘.</p> <p>They all appeared on stage for the anthem,before taking their seats to watch the concert.</p> <p>American country music artist , Lee Greenwood and Pop Icon Lady Gaga performed.</p> <p>US President Donald Trump did not attend but sent a video message to express his gratitude for their “wonderful work”.</p>