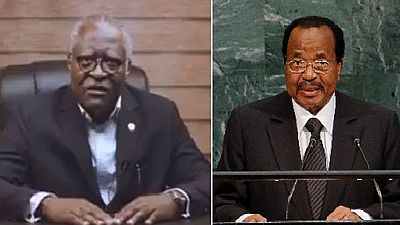 Akere Muna, a prominent Cameroonian lawyer, has quit his post as an anti-graft campaigner as he prepares to contest for the presidency in polls slated for 2018.

Until last week, he was a Chairperson of the international Anti-Corruption Conference (IACC). He tendered in his resignation on Monday October 16, 2017, the body stated in a statement.

‘Barrister Muna has opted to avoid any conflict of interest, or any confusion that can arise from his personal ideas and those of the IACC, it said.

Muna, a former Vice Chairperson of Transparency International will be replaced by Delia Ferreira Rubio of Argentina. Rueben Lifuka from Zambia was also elected vice chair of the IACC.

The group describes itself as the world’s premier forum that brings together Heads of State, Civil Society, the Private Sector and more to tackle the increasingly sophisticated challenges posed by corruption.

Muna announced his presidential bid last week via a video address stating that his decision was premised on wanting to give the central African country a fresh start after years under incumbent Paul Biya.

Muna who hails from the Anglophone region, in the address and a statement cited by AFP said it was time for the Central African country to reset its direction hence his decision to enter the race.

“We have to walk to a new Republic”, which will be “based on good governance” and “the rule of law,” he asserted, saying that there would be no “tolerance for corruption, tribalism, nepotism and favoritism,” with him in charge.

Cameroon is due to go to the polls in 2018 and incumbent Paul Biya is expected to contest to extend his over three decades in charge. John Fru Ndi, the main opposition leader who lost the 2011 race to Biya, has also yet to confirm his participation.

Muna’s announcement comes at a time that Cameroon’s Anglophone areas are facing a serious social and political crisis since November 2016. The two regions – North West and South West – are pushing for independence under the Ambazonia republic.

Their attempted symbolic independence declaration on October 1, 2017 was met with heavy security crackdown which led to official deaths of eight people. Rights group, Amnesty International, puts the casualty figure at 17. Scores were reported injured and mass arrests made.

The United Nations, United States, United Kingdom and other religious groups have all called for the need to open dialogue between the government and leaders of the restive region. President Biya has also condemned the violence and called for dialogue.