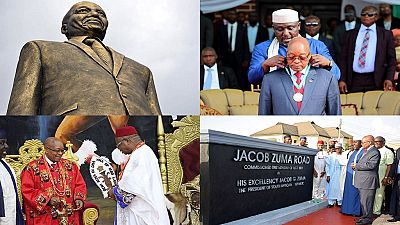 Embattled South African President Jacob Zuma was honoured on Saturday with a giant statue, a road named after him, a chieftaincy title and an award during a visit to Nigeria’s southeast state of Imo, sparking a lot of outrage.

A bronze statue of President Jacob Zuma unveiled and a road named after President Zuma as part of the honour by the Imo State in Nigeria pic.twitter.com/wSKrjg4w55

The Governor of Imo State Rochas Okorocha has come under a lot of attack for honouring Zuma who is facing multiple charges of corruption after surviving multiple impeachment processes in his country.

Is Governor Okorocha not aware that Mr. Zuma has been found guilty of corruption by the courts in South Africa and has been ordered to refund the $500,000 stolen from the public treasury to expand his private house to accommodate his many wives?

The unveiling was done in the state capital Owerri during a ceremony attended by former President Olusegun Obasanjo, former governors, chiefs and distinguished members of the state.

A civil society group against corruption condemned the governor for the gesture which they described as embarrassing in the face of the corruption allegations against Zuma.

“It is embarrassing that a state government controlled by the All Progressives Congress which is fighting corruption could play host to Mr. Zuma, allegedly a corrupt leader in the current assembly of heads of state in the African Union and portray him as a hero before a group of African youth,” said Lanre Suraj, the chairman of the Civil Society Network Against Corruption.

“Is Governor Okorocha not aware that Mr. Zuma has been found guilty of corruption by the courts in South Africa and has been ordered to refund the $500,000 stolen from the public treasury to expand his private house to accommodate his many wives?” he added in a statement.

The group said it expected the federal government to call the governor to order. They demanded an apology from Okorocha for “promoting President Zuma who has been adjudged to be a corrupt leader by the South African judiciary”.

75-year-old Zuma has faced persistent corruption allegations, most recently over leaked emails that suggest his friends the Gupta family may have used their influence to secure lucrative state contracts for their companies.

The honour of Zuma in Nigeria was also condemned by a cross-section of Nigerians including the opposition and former government officials.

Nigerians are murdered by South African security forces every day yet the clown in Imo state builds a statue in honor of Pres. Zuma.

Igbos are murdered by Nigerian security forces every day yet that same clown in Imo state continues worship MBuhari.

Slavery is a curse!

Rochas Okorocha should have just stayed a benevolent billionaire. A statue for Jacob Zuma is the height of insanity at a time like this.

2 Nigerians killed & others injured by South African police.
No word from Jacob Zuma…yet Rochas Okorocha built a statue in his honour. pic.twitter.com/ir3N6EHar4

If you think building Jacob Zuma's statue was outrageous, wait until Gov. Okorocha unveils the statue next to Zuma. It may be Nkiru Slyvanus pic.twitter.com/8KLwpKZukp

It would have been better If Rochas Okorocha built a huge Statue for Nelson Mandela instead of Jacob Zuma!!!

Gidi_Traffic Each time I look at this Jacob zuma statue I can't stop to think is Rocha's okorocha well at all?. pic.twitter.com/52U7LRdi7X

What’s wrong with Rochas Okorocha? What has Jacob Zuma contributed to the development of Imo State or even Nigeria? Unfortunate leaders.