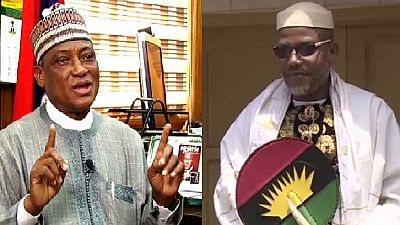 Nigeria’s Defence Minister, Mansur Dan-Ali, insists that separatist group the Indigenous People of Biafra (IPOB), by their actions were planning to destabilize the country, hence the action taken by government to nip their activities in the bud.

The retired Brigadier – General was speaking in an interview with the state-affiliated Channels TV where he addressed government’s handling of the pro-Biafra agitation.

According to him, a group that had established its own security forces could not be taken lightly by a government that seeks to protect national unity and security.

There are so many factors that indicated that this IPOB group is not a peace-loving group because they have gone far beyond what is expected of a peaceful group.

“The Defence Headquarters of the Armed Forces did their analysis and there are so many factors that indicated that this IPOB group is not a peace-loving group because they have gone far beyond what is expected of a peaceful group.

“Why I say so? There are so many things they came up with. They mentioned that they are forming national guards; they have formed intelligence and what you call security forces.

“They have even gone beyond that to come up on social media to say that if their agitation is not meant, they are going to bring down tools across the country. So does any group that has peaceful intentions go to that extent?” he asked.

He defended the military operation currently underway in the south-east region. Soldiers of the operation codenamed ‘Python Dance’ clashed with IPOB members at the family home of IPOB leader Nnamdi Kanu. Kanu has since been missing, the military denies he is in their custody.

On the subject of the group’s proscription, the Minister said it was a duty executed by the Ministry of Justice but also in the larger interest of public peace and security. IPOB is currently a terrorist group under Nigerian law.

An Abuja High Court granted a government request to that effect last month. Kanu’s lawyer has since challenged it saying his client was not leading a terrorist group. The government has since written to foreign governments seeking legal assistance mainly to close the group’s funding sources.