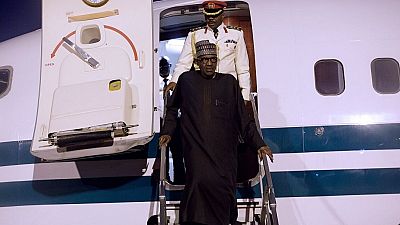 Nigerian President Muhammadu Buhari has returned to Abuja after spending three days in London for a routine medical checkup.

He arrived Monday night after leaving the country on September 17 with Nigeria’s delegation to the United Nations General Assembly in New York.

Pres MBuhari is back to Abuja,after leading Nigeria's delegation to the 72nd Session of the UN General Assembly in New York #NigeriaUNGA17 pic.twitter.com/8GoHSSPEEq

This third London trip was short as compared to the previous one which lasted over 100 days leading to protests calling for his resignation.

The ailment behind his series of absence has not been disclosed, and this has created a lot of controversy in the country since his first leave in January that lasted nearly two months.