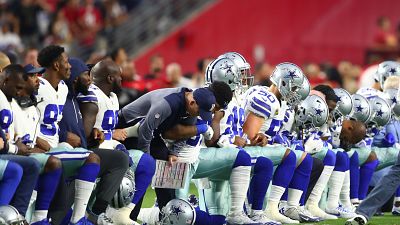 In the United States, the row over ‘taking a knee’ during the national anthem has taken another twist.

The Dallas Cowboys and their owner Jerry Jones decided to demonstrate by staging a pre-game “moment of unity” ahead of the star spangled banner.

Prior to the National Anthem, the DallasCowboys and AZCardinals shared a moment of unity on the field. pic.twitter.com/RSWQwHTyeD

The protest, originally to highlight racial inequality, caused a storm after Donald Trump called for players who take part to be sacked or suspended.

The NFL has all sorts of rules and regulations. The only way out for them is to set a rule that you can’t kneel during our National Anthem!

NBA basketball star LeBron James has also waded into the debate by praising the NFL players who protested against Donald Trump. He’s accused the US president of “using sports to try and divide” people.

Trump has also withdrawn a White House invitation to the Golden State Warriors to mark their NBA title after Steph Curry said he did not want to attend.