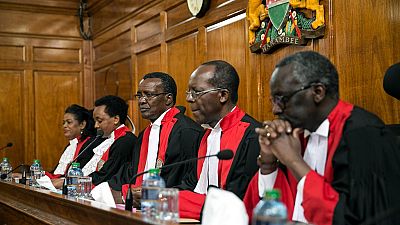 Kenyan police tear-gassed opposition supporters demonstrating near the Supreme Court on Wednesday as judges began to deliver a detailed ruling that criticised the election board for its performance in last month’s annulled presidential election.

Voters are anxious to find out whether the vote was voided on procedural grounds or whether there was evidence of systematic rigging. The court has already said in a brief Sept. 1 ruling that some tallying sheets were not signed or officially stamped.

Election board officials had said incumbent President Uhuru Kenyatta won by 1.5 million votes but that was rejected by opposition leader Raila Odinga, who says the 2017 election, as well as the previous two votes, were stolen from him.

The court ordered a fresh vote to be held within 60 days. Kenya has the region’s biggest economy and is a diplomatic and security hub for East Africa.

In the introduction to the detailed ruling on Wednesday, Judge Philomena Mwilu criticised the election board for refusing to comply with court orders to open its computer servers, saying it meant that opposition claims of hacking or manipulation could be true.

“Noncompliance or failure by the board to do as ordered must be held against it,” said Judge Philomena Mwilu.

Mwilu also said it appeared the board did not have all the necessary tally forms when they announced official results.

“The (board) cannot therefore be said to have verified the results,” she noted.

She also said the board should have made alternative arrangements to transmit scanned tally sheets quickly when it was clear that around a quarter of polling stations did not have access to internet via mobile phone.

Many of those polling stations were a short drive from areas with good network coverage, she said.

“It is an inexcusable contravention … of the election act,” that the forms were not quickly available, she said, noting officials said thousands of forms from polling stations were still unavailable four days after the official results were announced.

On Tuesday evening, Deputy President William Ruto tweeted: “So has CJ taken sides? Listening to the tone, language & drift of (Chief Justice David) Maraga’s lecture the only phrase missing is NASA HAO! TIBIN! & TIALALA!” — phrases that are a rallying call for the opposition coalition.

Earlier, the chief justice told a press conference that judges were getting death threats and the police were not offering adequate protection, an allegation that the chief of police denied.