Internet slowdown in Togo ahead of another presidential limits protest 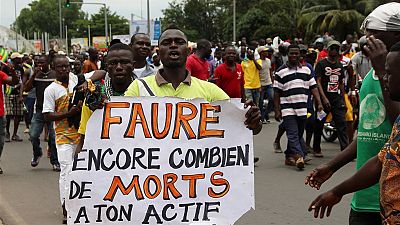 <h3>Internet connection has been intermittent in Togo hours ahead of another planned protest for the reinstatement of the 1992 constitution that stipulates a two-term presidential limit.</h3> <p>The internet slowdown started last night after the boycott of a constitutional reform vote by the opposition in parliament who described it as a sham, and called for another round of demonstrations on Wednesday and Thursday.</p> <p>Bandwidth has been reduced and WhatsApp has been totally blocked in the country creating difficulties in accessing the internet, Togolese journalist Emmanuel Agbenonwossi told Africanews.</p> <blockquote class="twitter-tweet" data-conversation="none" data-lang="en"><p lang="en" dir="ltr">It’s a slowdown on the network. The bandwidth is reduced. WhatsApp is totally blocked on mobile networks. However working with <span class="caps">VPN</span>s</p>— Emmanuel Vitus (@emmavitus) <a href="https://twitter.com/emmavitus/status/910399230631714816">September 20, 2017</a></blockquote> <script async src="//platform.twitter.com/widgets.js" charset="utf-8"></script> <p>Togolese activist Farida Nabourema said they expect a total shutdown as was experienced during previous protests. </p> <blockquote class="twitter-tweet" data-lang="en"><p lang="en" dir="ltr">Confirmed. WhatsApp has been shutdown again in <a href="https://twitter.com/hashtag/Togo?src=hash">#Togo</a> night before the protests. We’re expecting a complete shutdown soon <a href="https://twitter.com/hashtag/Togodebout?src=hash">#Togodebout</a></p>— Farida Nabourema (@Farida_N) <a href="https://twitter.com/Farida_N/status/910270849202171904">September 19, 2017</a></blockquote> <script async src="//platform.twitter.com/widgets.js" charset="utf-8"></script> <p>The Togolese opposition are calling for a two five-year term limit for presidents as well as a two-round voting system.</p> <p>A bill was tabled before parliament by the cabinet during the early September round of demonstrations to reinstate the term limits which were struck out by the father of Faure Gnassingbe before his death.</p> <p>The opposition rejected the draft bill to modify Article 59 of the constitution which has maintained the exclusion of the clause that says “no one can serve more than two terms”.</p> <p>They believe it is a ploy to allow Faure, who is serving his third term, to attempt a fourth in 2020.</p> <p>Their boycott of parliament on Tuesday blocked the passage of the bill forcing it to be decided in a referendum due to the lack of the needed four-fifths majority.</p> <p>The six-party opposition coalition <span class="caps">CAP</span> 2015 and the Pan-African National Party (<span class="caps">PNP</span>) have called for renewed protests while Gnassingbe’s Union for the Republic (<span class="caps">UNIR</span>) party has also planned marches on the same day.</p> <p>President Faure Gnassingbe succeeded his father Gnassingbe Eyadema who died of a heart attack after spending 38 years in office.</p> <p>Faure was sworn in with the support of the army and won the 2005 elections leading to deadly protests.</p> <p>He subsequently won the 2010 and 2015 presidential elections.</p>