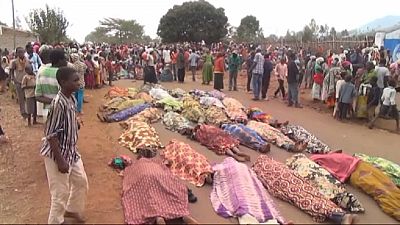 The Democratic Republic of Congo said Sunday that it had opened an inquiry after soldiers fired on Burundian refugees in the eastern South Kivu province, killing dozens.

Government spokesman Lambert Mende also claimed that many of those killed during the clashes were members of an “armed group”, without providing details.

The UN’s MONUSCO peacekeeping mission in the country had said Saturday that at least 36 refugees were killed in the violence in Kamanyola on Friday, in which a Congolese soldier also died.

But Mende appeared to dispute this, saying: “It has even been claimed they had bibles: Was the Congolese army lieutenant killed after being hit by bibles?”

Witnesses told AFP that many of the Burundians in Kamanyola were victims of religious persecution because they are followers of a female prophet called Zebiya, who has attested to seeing visions of the Virgin Mary in northern Burundi.

Interior ministry official Josue Boji said Saturday that the clashes began after a group of refugees overran a jail run by the country’s domestic intelligence agency to demand the release of four Burundians who had been arrested for expulsion on Wednesday night.

Boji said troops tried to disperse the refugees by “firing in the air but were overwhelmed” when the group responded by throwing stones.
At least 124 refugees were also wounded.

Tens of thousands of Burundians have fled to the eastern DR Congo to escape a wave of violence that unfurled in 2015 after Burundian President Pierre Nkurunziza sought a fiercely contested third term in office.

Overall, the violence in Burundi has claimed 500 to 2,000 lives, according to differing tolls provided by the UN or NGOs, and more than 400,000 Burundians have fled abroad.

Around 36,000 are in DR Congo, mainly in the overcrowded camp of Lusenda in the east, or several transit camps.