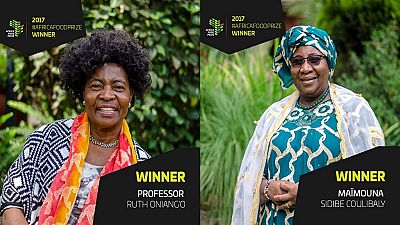 The 2017 Africa Food Prize for African achievers in agriculture was awarded to academic Professor Ruth Oniang’o of Kenya and entrepreneur Mrs Maïmouna Sidibe Coulibaly of Mali for their outstanding effort to improve farming in Africa.

The joint winners were announced last week at the African Green Revolution Forum in the Ivorian capital Abidjan where they were awarded the prize money of $100,000.

Professor Ruth Oniang’o is a leading academic expert in Food Security and Nutrition in Kenya where she is the founder and leader of the Rural Outreach Programme, a community-based organisation that supports farmers to produce and process yields at the grassroots.

She is also the founder and editor of the first peer-review journal on agriculture in Africa – African Journal of Food, Agriculture, Nutrition and Development (AJFAND).

Mrs Maïmouna Sidibe Coulibaly on the other hand is the founder and owner of Faso Kaba seed company in Mali where she has had over 10 years of experience in the agro-industrial sector.

She set up her company in 2003 to help solve the food shortage problem in Mali by producing and marketing agricultural seeds for the benefit of small farmers.

The two women were selected out of 643 nominations.

This is the second Africa Food Prize award since the rebranding in 2016 from the Yara Prize to Africa to give the award an African identity.

Last year’s prize was won by the President of the International Fund for Agricultural Development (IFAD) Dr. Kanayo F. Nwanze from Nigeria.

He was the sole recipient of the $100,000 prize for his demonstrated success in advancing policies, programs and resources that have improved the lives of millions across the continent.

On the global scale, the President of the African Development Bank Dr Akinwumi Adesina won the 2017 World Food Prize in June.

He is the fifth African to take home the $250,000 prize for advancing human development by improving the quality, quantity or availability of food in the world.