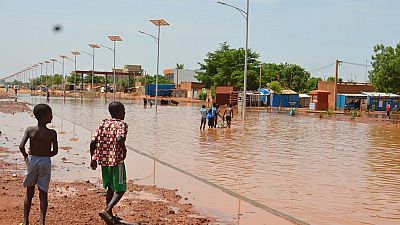 The Niger Basin Authority on Saturday warned of the risk of severe flooding in Benin and Nigeria, two countries crossed by the river, that has burst its banks.

“We are appealing to all the residents, downstream (in the Nigerian territory) to Malanville in Benin and Nigeria, because the rise of the water continues,” Sungalo Koné from the NBA.

“Everything we record as a rise in water will spread to Benin and Nigeria,” he insisted.

We are appealing to all the residents, downstream (in the Nigerian territory) to Malanville in Benin and Nigeria, because the rise of the water continues.

After a first “yellow alert”, the NBA declared “the orange alert” on Thursday, the last level before “the red alert,” he noted.

These floods are a result of heavy rains that have been pouring since June in Niger and Mali.

“It is a matter of hours to reach the red alert, because there is a sudden rise of water,” warned Lawan Magadji, the Nigerian Minister of Disaster Management.

The flood “threatens” the island villages and several districts of Niamey, warned the minister on television.

The minister has already announced a plan to evacuate the residents of the affected areas and a “reinforcement” of the protective dikes.

Sites have even been set up to accommodate displaced populations, he said.

Almost all the one and a half million inhabitants of Niamey live on the banks of the river.

To avoid surprise of another sudden rise of the waters, the inhabitants have formed “brigades” to “watch” on the shores.

“Some fifteen villages” on the banks of the river, with thousands of people, were evacuated this week in the Dosso region in the south-west of Benin and Nigeria, the minister said.

The heavy rains that have plummeted since June in Niger have already left 44 dead – including 17 dead in Niamey – and more than 80,000 victims throughout the country, according to the latest official report.

It is paradox for this predominantly desert country.