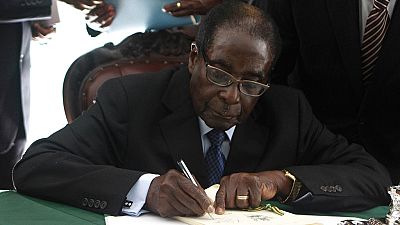 President Robert Mugabe on Friday said Zimbabwe will begin compiling a new voter register next week ahead of the 2018 presidential and parliamentary elections, in which the 93-year-old is seeking to extend his 37-year hold on power.

Mugabe said in an official government notice that the Zimbabwe Electoral Commission would start registering voters on Sept. 14 and would end the process on Jan. 15.

Opposition parties have been demanding a new roll for voters and have previously accused Mugabe’s ruling ZANU-PF party of manipulating the existing register. ZANU-PF denies these accusations.

Mugabe also told the central committee of his ZANU-PF on Friday that his party should galvanise supporters to register anew.

He said Western powers were behind the last month’s reunification of the main opposition Movement for Democratic Change but added that the opposition would still be defeated by ZANU-PF in next year’s votes.

“We know of course they are creatures of the West whose sole purpose is to dislodge ZANU-PF from power. But really, they come together as a bundle then one blow against a bundle will set the bundle in pieces,” Mugabe said to applause from ZANU-PF members.