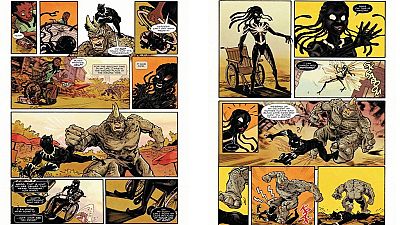 U.S. comic book publisher Marvel has launched the first superhero comic set in Nigeria’s commercial capital Lagos and inspired by the adoption of the Chibok girls in 2014.

The comic titled Blessing in Disguise features Ngozi, who is a superheroine fighting evil in Nigeria’s commercial capital Lagos. This is the first story to be set in an African country by Marvel.

Created by science fiction writer Nnedi Okorafor, the story was published on Wednesday as part of Marvel’s Venomverse comic with Ngozi appearing alongside Black Panther and Spider Man villain Venom.

Nnedi Okorafor is working on a story set in Lagos about a young girl, Ngozi, titled “Blessing in Disguise” for Marvel’s Venomverse. pic.twitter.com/ny5OrCp7ET

Ngozi is a character based on one of the Chibok girls and is expected to serve as a role model for girls, said the award-winning Nigeria-American writer Nnedi Okorafor.

“I had asked the artist to make Ngozi in the likes of one of Chibok girls … I asked her to draw Ngozi in her likeness,” Okorafor told the BBC.

“They were normal girls who suddenly had to deal with a huge change in their lives … and their story of perseverance is so powerful. Like many Nigerian girls, Ngozi comes in a small package but is strong-willed and determined,” she told the Thomson Reuters Foundation.

Okorafor has created over 20 novels and short stories including award-winning Binti and her debut novel Zahrah The WIndseeker which won the Wole Soyinka Prize for Literature in Africa award.

Okorafor said her dream is to see the Ngozi character create diversity in the world of superheroes which will inspire the creation of more African comic book characters.