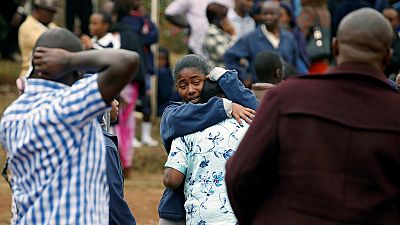 A student of the Moi Girls High School has been arraigned at a juvenile court in kenya’s capital Nairobi over the arson in her school that resulted in the death of nine of her classmates.

She was denied bail and remanded in police custody to allow for further investigation by the police, local media report.

The girl, accompanied by a security official, was covered up when she arrived at the Milimani juvenile court to keep her identity discrete because she is a minor.

The fire engulfed a dormitory of the boarding school on Saturday and seven girls were killed in the blaze while two others later died of their injuries. 10 others were admitted at a hospital with several degrees of burns.

Education minister Fred Matiang‘i said on Monday that the fire was arson and that there had been a spate of such fires caused by fights over senior appointments in schools.

The school has been closed for two weeks for further investigation.

Last year, a number of schools were torched by arsonists with 113 secondary schools destroyed by fire in three months.

In 2001, 58 schoolboys were killed in a dormitory fire at Kyanguli Secondary School outside Nairobi. In 2012, eight students were killed at a school in Homa Bay County in western Kenya.