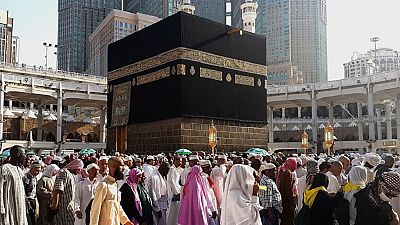 Millions of Muslims worldwide are heading to the Islamic holy city of Mecca in Saudi Arabia for this year’s Hajj pilgrimage.

The Saudi Arabia government has increased the quota of pilgrims from all the 178 registered countries with 950,000 pilgrims expected to arrive at Jeddah, 750,000 at Madinah and 100,000 by land and sea.

The first group of pilgrims arrived in the city of Madinah last week from Pakistan to begin the religious rituals ahead of the largest annual gathering of people in the world starting on August 30 to September 4.

109 South African pilgrims were the first non-Arab Africans to arrive in the country last weekend for the pilgrimage.

At least 6,091 out of the 80,000 registered pilgrims have so far arrived in Saudi Arabia from Nigeria aboard 14 flights in four days, Nigerian officials said.

Ghana’s 6,200 pilgrims will begin their journey on August 10 by air from the capital Accra and northern city of Tamale.

9,300 pilgrims from Somalia are participating in Hajj this year as against the 7,300 pilgrims last year. The Somali government said that the Saudi government has also lifted the ban on allowing Somali livestock into the Kingdom.

Gambia is also sending 1,700 pilgrims this year while 15,000 from Ethiopia are participating. The island nation of Mauritius is sending 1,500 pilgrims from August 15.

29,000 medics and paramedics have been deployed by the Saudi health ministry to serve the Hajj pilgrims at its designated 25 hospitals and more than 155 temporal primary health care centers.

The facilities have 5,000 beds, including 500 for intensive-care units and 550 for emergencies with 100 mini-ambulances.

The ministry has instructed participating countries to administer a mandatory meningitis vaccination and a recommended flu vaccination for all pilgrims.

A polio vaccine is required from pilgrims of some 20 countries – 14 from Africa – that are deemed vulnerable to reinfection eventhough they are no longer affected by the disease.