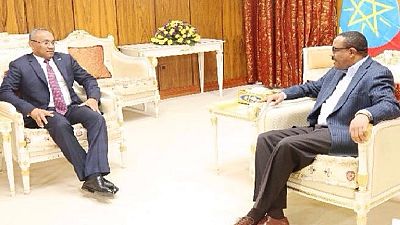 Juneidi Basha, President of The Ethiopia Football Federation (EFF) has confirmed that the government has plans of hosting the African Cup of Nations (AFCON) in the future.

According to him, as part of efforts geared towards that dream, Ethiopia was building eight new stadiums each with a capacity of 30,000 in its sports infrastructure drive.

Head of the continent’s football governing body, Ahmad Ahmad was recently in the country for an official visit.

PM Hailemariam affirmed Ethiopia’s growing capacity to host AFCON. Ethiopia is building 8 new stadiums each with a capacity of over 30,000. pic.twitter.com/vI9I4K1qMz

The country known more for its exploits in the field of athletics might start off hosting some junior level competitions for now, some reports have suggested.

As part of his visit, the CAF president also visited a center of excellence, youth sports acedemy and the national stadium under construction in the capital, Addis Ababa.

CAF recently made widespread changes to the format and timing of the AFCON starting with the next edition due in 2019 in Cameroon. The time for the comeptition has been moved to June whiles the participating teams expanded to 24.

After Cameroon 2019, which the Central African country insists it is ready to host despite CAF’s reforms, Ivory Coast is in line to host come 2021 before Guinea takes its turn in 2023. It is unclear how soon Ethiopia will thrown in their hat.