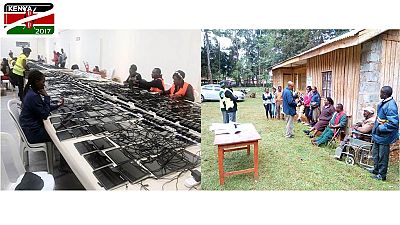 Kenya’s electoral commission has assured that contingency plans are in place for the thousands of polling stations across the country without internet connectivity.

Out of the 40,883 polling stations nationwide, 11,155 have been identified as having no network.

Find here all 11,155 polling stations affected by the lack of 2g and 4g network coverage. Contingencies are in place. #ElectionsKE2017 pic.twitter.com/wukTRg5GCf

The Independent Electoral and Boundaries Commission (IEBC) said on Sunday that the only problem will be a “relative delay” in transmitting the results.

Presiding officers will move for better signal, use satellite phones to transmit results ... satellite devices are in all 290 Constituency Tallying Centers.

“Presiding officers will move for better signal, use satellite phones to transmit results … satellite devices are in all 290 Constituency Tallying Centers,” IEBC announced.

PO’s will move to areas with network coverage. Plus satellite devices are in all 290 Constituency Tallying Centers.

A week earlier, the IEBC cautioned against tampering with internet connection which they will rely on to transmit elections results.

The country’s communications authority responded saying it has no intentions of doing so.

19.6 million Kenyans will vote on Tuesday, August 8, for a president and 350 members of parliament.

There are 15,074 candidates for Member of County Assembly, Member of Parliament, Women Representative, Senator, and Governor; 40,883 polling stations in 290 constituencies, 47 counties.