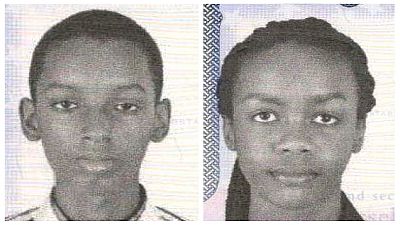 Two members of a teenage robotics team from Burundi who went missing after a competition in Washington last week have been located and are safe, the city’s Metropolitan Police Department said on Tuesday.

The teens, Don Ingabire, 16, and Audrey Mwamikazi, 17, were spotted last week crossing the border into Canada. The Metropolitan Police Department would not say on Tuesday where or when they were found, citing department procedures for missing persons.

“The others are still missing, so the case is still under investigation,” police spokeswoman Karimah Bilal said.

Four boys and two girls from the African nation were last seen on July 18 after the FIRST Global Robotics Challenge concluded. Organizers have said the disappearance may have been “self-initiated” because the students’ hotel keys were left in a chaperone’s bag while their clothes were taken.

Police have said they did not suspect foul play.

The Burundian embassies in Ottawa and Washington said they were unaware on Tuesday that two of the students had been found.

The other missing Burundians have been identified as Nice Munezero, 17; Kevin Sabumukiza, 17; Richard Irakoze, 18; and Aristide Irambona, 18.

High school students from more than 150 countries took part in the FIRST Global competition. An all-girl squad from Afghanistan drew worldwide attention when President Donald Trump intervened after they were denied U.S. visas.

Burundi has long been plagued by civil war and other violence. Fighting has killed at least 700 people and forced 400,000 from their homes since April 2015.