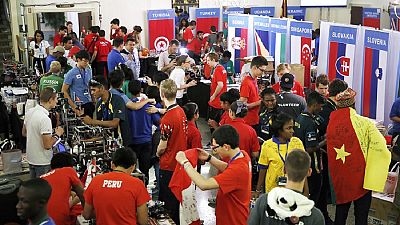 Benin and Liberia were ranked highest among the 40 African countries that participated in the just ended FIRST Global Challenge robotics competition held in the United States capital, Washington DC.

The six-round maiden international robotics event saw 163 national teams including 6 continental teams made up of students from around the world competing with the common goal of increasing their knowledge of Science, Technology, Engineering, and Mathematics (STEM).

At the end of the event on Tuesday, Benin ranked 7, followed by Liberia which ranked 12 out of the 163 participating countries for getting the most cumulative points over the course of the competition.

Their tasks were to build robots which will accomplish engineering tasks as a global society to solve water crisis. Robot kits were delivered to each team in the first two weeks of March 2017.

The teams were organized into two competing alliances, each alliance composed of three national teams that rearrange into different alliances for each match.

These alliances are tasked with accomplishing engineering tasks such as the storing of drinkable water, filtering of contaminated water, and procuring of new sources water.

The Gambian team – like the team from Afghanistan – were granted visa after initially being denied. They ranked 106.

All the participating students – aged between 15 and 18 – were recognised for their efforts while the top three ranked teams – Team Europe, Poland and Armenia respectively – were awarded gold, sliver and bronze medals respectively.

The 2018 competition will be held in Mexico City in Mexico.

Below are the ranks of the participating African countries at the end of the competition.