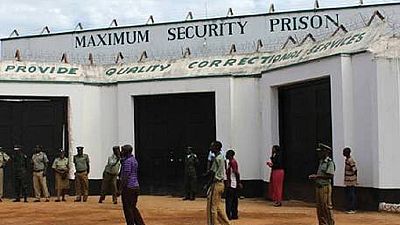 Hakainde Hichilema, Zambia’s main opposition chief has been returned to a maximum security prison almost a month after he was first transferred there pending his trial for treason.

The United Party for National Development (UPND) leader on Wednesday confirmed vis his social media handles that he had been transferred from the Lusaka prisons to the Mukobeko Maximum Security Prison in Kabwe.

Hichilema and 5 others were sent to the maximum security jail on June 9 but were subsequently brought back to Chimbokaila prisons in the capital, Lusaka, where they had been held since arrest in April.

For now, our stay here is unpredictable, but we can state that our country's democracy is under threat and we must all rise to defend it, as for us we will to the end.

Whiles confirming that he and his other accused persons in the treason trial had been moved again, he called for party members to remain vigilant. The 55-year-old economist also reiterated his call for the defence of democracy which he said was under threat.

‘‘The state has moved us from Chimbokaila prison in the capital city, Lusaka to Mukobeko where are we right now.

‘‘We call on you out there to remain strong and watchful of each other, especially our country’s democracy and always remember that it’s darker before dawn and to everything there is an end, this includes life.

‘‘For now, our stay here is unpredictable, but we can state that our country’s democracy is under threat and we must all rise to defend it, as for us we will to the end,’‘ the statement read in part.

CONFIRMED: Hichilema& 5 others been moved to Mukobeko Maximum Prison in Kabwe, despite court order,thus,catching his legal team by surprise. pic.twitter.com/dXO98ieiRh

In June this year, a Magistrate ruled that the economist and successful businessman and five others should be tried by a High Court on charges of treason for the prime charge of endangering the life of the president when his motorcade refused to give way to President Lungu’s early this year.

The UPND leader was arrested in April during a police raid on his home in the capital Lusaka. Hichilema was said to have endangered the life of the president when his motorcade refused to give way to a presidential convoy months back.

His lawyers previously said the case should not proceed to a high court because the officer who issued the trial papers had no authority to do so. With the current development, a trial date would be set by a high court judge.

Zambia, a major copper producer has been in a politically tensed state following disputed elections held in August last year.

The UPND have maintained that the polls were rigged in favour of President Edgar Lungu and the ruling Patriotic Front (PF). They have however failed to overturn the results through the courts.